PEACE to the whole WORLD

Support to the author!

based on principles of Equality, Equivalence and Stable Equilibrium

en → PEACE to the whole WORLD!

PEACE to the whole WORLD!

Using physical terms, we can say that to the beginning of the XXI century contrary to Christ’s commandments on the planet Earth the pernicious model of the development of public and interstate relations, based on the principles, similar to interaction of different in volume and durability “parts of the closed circuit was formed”. 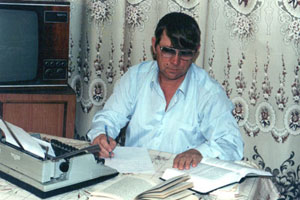 The Circuit consists of different in social-economic-political and military influence states-parts. The increasing social and economic and natural-climatic pressure on the given circuit, provoked by a man, comprises danger of ecological catastrophes, destruction of weak parts of the circuit — the states, because of pernicious carelessness and egoism of the strong states-parts. “The West became rich not owing to the market economy, but owing to the impetuous robbery of colonies in the past and under-developed countries today,” — Zombart, the Nobel Prize winner.

In response, weaker states-parts, in their struggle for existence, national, religious originality, are in constant search of measures of pressure reduction on the parts-states, due to durability attenuation of other states, terrorism, nuclear, bacteriological, demographic blackmail… “Deficiency of nutrition, education, political culture, deficiency of worthy life, at last, makes the South and especially African continent the weapon of punishment of terrible destructive force,” — Vladimir Pankov “The Independent Newspaper” October 25, 1994.

This pernicious way of development of the planet Earth leads the world into the precipice of the universal chaos and ecological catastrophes. And with the development of industrial production of goods the natural-climatic-raw component in conflicts between the states became one of the main: “People perish for metal! People perish for metal…”, and not only, but also for gas, wood, oil…

What should be done? In the work “Point of support”, completely published in the Edition of Administration of the President of Russia “Presidential control” № 3, 5, 6 2000, I propose a new model of construction and development of the society on principles of interaction of communicating vessels, which I consider more reasonable, humane and life-asserting.

Thousands of vessels-states, different in culture, creed, state system and economic potential, will be connected among themselves with veins of the world community, interested in planetary, fair division of the labour and capital market, creation of new resource-saving technologies.

The basis of such interstate connections: convertible national currencies of the states provided \filled\ with natural-raw, industrial-production resources of the state. The resources, through the convertible currencies, will be accessible to the whole world community. And away all possible barriers and restrictions!

And as it is not possible for me “to knock at the heavens’ doors” — native Russian government more than 15 years, and — “M. V. Trofimov’s idea of providing a rouble with ground and cost of material and other values, located on the Earth and its bowels, as general money equivalent can be realized only at th mutual consent of the majority of the developed states of the world…” — A. A. Chernyaev, Director of the Volga region Scientific Research Institute of Economic and Organization of Agro-industrial Complex, doctor of economic sciences, corresponding member of Russian Academy of Agrarian Sciences, so I apply to scientists, politicians, statesmen, to whom the Civilization arisen several thousands years ago on the planet Earth is dear: “Believe: things I propose are very serious and important. Support me in my search to make life on our planet more harmonious and kind”.

The important component of my proposals is in the concept — fastening, filling of the national currency of Russia with all industrial and energetic-raw power of the country by means of introduction of Land and Stock standard in the territory of Russia.

Land and Stock standard is a part of the state ownership defined in value and natural terms.

Here is POWER SAFETY not only for Russia, but also for the whole WORLD!

Strengthening of the national currency with the property of the country, will provide Russia not only with balance of economic and socio-political interests of the boundary states, but also restoration of economic, cultural, interstate connections, both on the territory of the CIS, and beyond the bounds.

For the period of transition of the actual rouble rate (for the present moment) to its settlement rate, I suggest in the concept the flexible mechanism of filling of the national currency of Russia as its rate will grow with respect to other world currencies with material and currency contents of Russia.

The main thing: riches of pantries of Russia, being the prime cause of its misfortunes during many centuries, will become not only the guarantor of safety of Russia and its social and economic revival, but also stability all over the world.

As the guarantor of social-economic-political stability in Russia will act proposed by me in the concept:

At its acceptance the model of construction of the world community, development of interstate relations on principle of “communicating vessels” will determine the way of Universal consent, Equivalence and Stable equilibrium for many centuries forward. These are my ideas and suggestions.

I propose to begin the third millennium with substitution of the priority of values, based on wars, robberies and murders, for the priority of natural-climatic conditions, intelligence of an individual and spirituality of the society, given to a Man by God.

The questions and offers concerning the book “Point of support” send on mir@mtrofimov.ru or take advantage of the form of a feedback.

PEACE to the whole WORLD!

Support to the author!

It is registered in the international bank of ideas
on October, 13th, 1992

Copying and use of materials
without the written sanction of the author is forbidden.